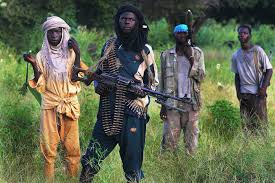 A series of attacks at the hands of Islamic militants has caused devastation across Kaduna state, Nigeria. In the latest assault, five people were killed when a group of Fulani herdsmen stormed Makyali village in Kajuru Local Government Area (LGA) in the early hours of Thursday morning, like reported by premierchristian.news.

The attack occurred just hours after Fulani fighters murdered a man and his wife in Katul village the previous evening. Both villages are located along the Kaduna-Kachia road and the attacks occurred despite the national Covid-19 lockdown and an increased military presence in the area.

Another person, 53-year-old Bomboi Abinfada, was killed on 12th May during an attack on Idanu-Doka village at around 4pm. The attacks took place on the same day that victims of an armed assault by Fulani assailants on the Gona Rogo community were buried in a mass grave.

According to Christian Solidarity Worldwide (CSW), on 11th May another attack left seventeen people dead; six others were injured, food stores were destroyed and several homes were burnt during an attack on the Baptist community that began around 11.30pm. The entire family of a 40-year-old man named Jonathan Yakubu was hacked to death along with his wife Sheba Yakubu, 32, and their children Patience, 13, Revelation, 6, and Rejoice, 4. Seven of the victims were minors.

The attacks are the latest in a string of murderous actions against the Christian community who reside in a part of Kaduna state that has been besieged by armed assailants of Fulani origin.

According to Christian Solidarity Worldwide, between the time a total lockdown came into effect on 25th March and the morning of 12th May, 38 people had been killed and around 133 houses destroyed.

CSW’s chief executive Mervyn Thomas said: “We condemn these deplorable acts of violence against innocent civilians, and are deeply perplexed they continue to occur, even in an area where security is already deployed. Almost daily we receive reports of horrific armed assaults on vulnerable Christian communities which appear to remain unaddressed.

“The impunity with which perpetrators are able to launch these attacks, is unacceptable…We call on the authorities both at state and federal levels to take visible and immediate steps to protect these communities and to pursue, disarm, arrest and prosecute the assailants.

“These attacks, which also occur in the south of the country, gravely threaten the unity and security of this multi faith and multi-ethnic nation at a time when Nigeria is already dealing with terrorist insurgencies, the collapsing oil price and the fall out of the Covid-19 pandemic. If left unaddressed, they could eventually spark a conflagration that will be extremely difficult to contain.”