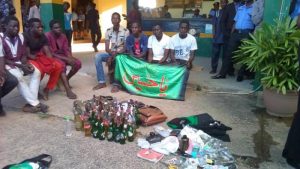 Latest report as the police has reportedly arrested hundreds of members of the Islamic Movement of Nigeria (IMN) otherwise known as Shiite Muslims who clashed with security operatives in Abuja earlier today, like reported by mynationnews.com.

According to reports, the suspects were arrested with petrol bombs and illicit drugs after the heated clash in Wuse district in the Federal Capital Territory.

The protesters reportedly set some police vehicles on fire during the clash as the security agents fired bullets and teargas at them.

This is the third day of the ongoing clash between security operatives and the Shiite members in Abuja.

Due to the clashes, there has been heavy security presence in all the major entry points into the city, in an attempt to curb anarchy and loss of lives.