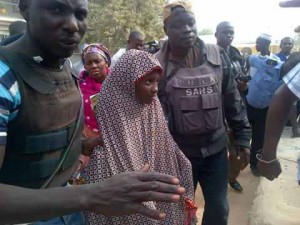 A girl aged 10 who is believed to have been groomed into terrorism by Islamist extremists in Nigeria killed herself and seriously injured another person in a suicide bombing on New Year’s Eve in Nigeria.

Another young female would-be suicide bomber was caught by an angry crowd before she could detonate her device, and lynched. Security forces then disabled her bomb.

The dead girl appeared to be wanting to buy noodles when she approached a tea stall in Maiduguri in Borno State in north-eastern Nigeria.

Witness Grema Usman told Nigeria’s Vanguard: “The girl walked towards the crowd but she blew up before she could reach her target.

“She died instantly, while one person was seriously hurt after after he was hit by shrapnel.

“From her corpse, the girl was around 10 years old.”

An aid worker suggested she had detonated the device too early because of nerves.

The latest attack follows an earlier incident in December when two even younger girls, aged just 7 and 8, injured 19 people in suicide bombing attacks. And in November, a pastor from the Church of Christ in Nigeria was among those who died in explosions caused by two female suicide bombers.

Nigeria’s Pulse reported that people in the food stall realised what was about to happen and ran away.

In December, Nigeria’s president Muhammadu Buhari claimed Boko Haram had been finally crushed and forced out of Sambisa forest, its last stronghold in the north east.

Abubakar Shekau, Boko Haram’s leader, denied this. In a video a few days later, and hours before the suicide bombing, he said: “We are safe. We have not been flushed out of anywhere. And tactics and strategies cannot reveal our location except if Allah wills by his decree.”

One in five suicide bombers used by Boko Haram in the past two years has been a child, according to a Unicef report, and three in four of these have been girls.

Laurent Duvillier, spokesman for Unicef, told Thomson Reuters: “The use of children, especially girls, as so-called suicide bombers has become a defining and alarming feature of this conflict.

“It’s basically turning the children against their own communities by strapping bombs around their bodies.”

Boko Haram’s seven-year campaign to turn the north east of Nigeria into an Islamic caliphate has so far led to the loss of 20,000 lives. Nearly three million people have been displaced. It is feared there could be up to 100,000 more deaths as the battles continue this year and beyond.

More than 20 schoolgirls kidnapped by the group in 2014 were released earlier this year.

Around 270 girls, most of them Christian, were taken from their school on April 14, 2014. Dozens escaped, and more than 200 are still missing.