You are here: Home / Africa / Nigeria: fresh explosion kills many in Maiduguri mosque 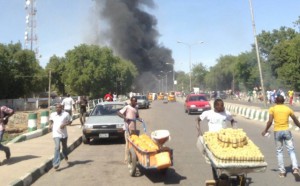 At least 20 persons were killed in a fresh explosion in Maiduguri, the Borno State capital, Monday morning, as residents gathered around a mosque.

The explosion sounded as residents speculated that a fleeing Boko Haram bomber abandoned an improvised explosive device in the area during Sunday night’s attack on the city.

A police officer, who informed PREMIUM TIMES of the incident, said the victims had gathered to investigate if a bomb was truly abandoned in the mosque.

“I have never seen such foolishness when people would go peeping into a mosque to find out if truly there was an explosive deposited in a place. But sadly, the bomb went off and over 20 persons were killed and many injured.”

But the account of Malam Suleiman, a primary school teacher in the area, was slightly different.

“The people normally sit down around the mosque in the morning,” he said. ”The place is like a meeting point where neighbours converge to relax.”

“After the morning prayers they just sat down outside the mosque as usual and then the bomb went off. It was not suicide bombing like that of last night. It may have been planted.