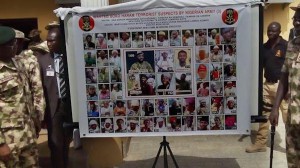 The military has released the pho­tographs of an­other set of wanted 55 Boko Haram terrorists. This brings the number of terrorists on the mili­tary’s wanted list to 257.

Prior to the latest fig­ure, the Army had twice in 2015 placed 202 in­surgents on its wanted list.
At the headquarters of the Theatre Command in Maiduguri, Borno State where he unveiled the photographs of the insurgents on Monday, the Chief of Defence Staff, Gen Gabriel Olo­nisakin, appealed to Nigerians to assist the military fish out the ter­rorists.

He said: “With this launch of additional photographs of wanted Boko Haram terror­ists, it is hoped that all members of the public and other peace-loving citizen will provide use­ful information that will aid in riding the society of these terrorists and criminal elements.”

Earlier, the Chief of Army Staff, Lt.-Gen Tu­kur Buratai, said that several of the 202 ter­rorists earlier declared wanted had either been killed or arrested during operations.

Buratai said: “We have earlier in the course of our campaigns against the insurgents from late 2015 published two edi­tions, comprising 202 individuals that have been identified, key members of the Boko Haram insurgents.

“In the course our counter insurgency op­erations, quite a signifi­cant number of these wanted terrorists have either been killed or arrested.

“Those arrested have been providing useful information that has as­sisted the Nigerian army undertake successful op­erations,” he said.