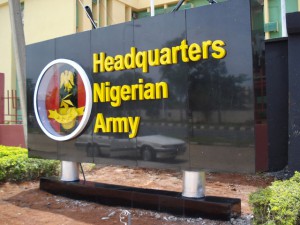 The Nigerian military has confirmed that the Boko Haram has link with other global terror groups such as the Islamic State in Iraq and Syria, ISIS, saying that it is now an ‘open secret.’ Chief of Defence Intelligence, CDI, Rear Admiral Gabriel Okoi, stated this yesterday in Abuja, while fielding questions from journalists at the Deputy Defence Advisers/Attaches/Librarians training conference.

The officers have also been charged to double their efforts in the area of ‘actionable intelligence’ required for effective Counter-Terrorism and Counter-Insurgency (CT COIN) operations. Okoi, when asked if there was substantive intelligence to validate the allegiance of Boko Haram with notorious terror groups like the ISIS said; “it’s an open secret.”

He also charged the defence attaches to ensure that the activities of Boko Haram and their linkage with global terror groups is well monitored, stressing that “failure to do that is at their own risk.”

He also said the theme for the conference, ‘Refocusing Activities of Nigeria’s Defence Missions to meet Contemporary Security Challenges,’ was carefully selected to guide their deliberations to the current efforts at addressing the security challenges bedeviling the country and create an atmosphere for sustainable national security and development.

Okoi also declared that with the recent victories against Boko Haram and successful conduct of the general elections, the internal security problem, especially in the North East has been drastically reduced. “It is unique and interesting as the international community will no doubt be looking forward to the roles Nigeria will play in the international arena with you as key players.

“This is coming at a time also when the security challenges which necessitated the increased involvement of the Nigerian Armed Forces in internal security operations has abated,” he said.

Meanwhile, the International Committee of the Red Cross, ICRC, yesterday, urged the Nigerian Army to adhere strictly to the international humanitarian laws in the ongoing counter-insurgency war in the North East. President of the Red Cross, Peter Maurer, conveyed the charge during a visit to the Chief of Army Staff, COAS, Lt-Gen. Kenneth Minimah, at the Army Headquarters in Abuja.

Maurer said their mandate is to ensure the implementation of the International Humanitarian law and ensure that this law is known by all armed forces, and respected by all armed actors. Maurer stated that the ICRC is increasing its operations in Nigeria and the Lake Chad region, which makes it necessary to engage the Nigerian Army to share its experience from engaging with other armed forces worldwide.

“We have reached the Nigerian army in the past already; we have engaged in a lot of training sessions; we have presented today a training video so that soldiers, even a game where, in a playful way soldiers can learn about the International Humanitarian Law,” he explained.

Maurer said the ICRC is also engaging the Nigerian army confidentially, “when we make observations on the ground with the Nigerian forces. So, we are not only engaging the headquarters, but also the field commanders.”

Responding, the Chief of Policy and Plan of the Nigerian Army, Major General Ugo Buzugbe, who represented the COAS, said the Nigerian Army ensures adherence to humanitarian laws in fighting insurgents in the North East.

“In our recent fight against the terrorists in Sambisa forest, you are all witnesses to the number of women and children that were rescued and these people, presently, are in the internally displaced camps in the North East. I am sure, Mr. President, that you will visit these people when you get to the North East,” he said.