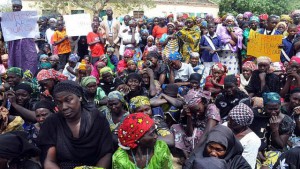 Nigeria’s military claimed the rescue of 200 girls and 93 women from a notorious Boko Haram stronghold, but said there was no confirmation the hostages were those kidnapped from Chibok a year ago.

“Troops have this afternoon captured & destroyed 3 camps of terrorists inside the Sambisa forest & rescued 200 girls & 93 women,” defence spokesman Chris Olukolade said in a text message, referring to the area in northeast Borno state where the extremists have bases.

“It is not yet confirmed if the girls are the Chibok girls,” he said. ” The freed persons are now being screened & profiled.