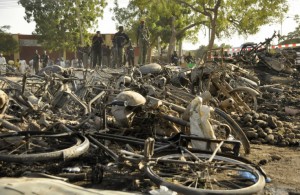 A child girl suicide bomber, aged about 10, has killed at least 19 people in north-eastern Nigeria.

The bombing was carried out in a crowded market area in the Nigerian city of Damaturu in Yobe state. Dozens of others were also injured in the attack, which took place on Sunday morning (26 July. The suspect set off her device just when security personnel were screening people before letting them enter the market area.

No group has formally claimed responsibility but Boko Haram Islamists are suspected to be behind the bombing.

A police spokesperson told Reuters that “a female of about 10 years old capitalised on the crowded entrance of the market where screening was being conducted and detonated the device”.

Another bombing took place in Cameroon’s Maroua town killing several others on the same day.

Boko Haram has stepped up the attacks in Nigeria and neighbouring nations in recent months. Hundreds of people have been killed in many suicide attacks even as the regional powers are strengthening their cooperation against the Islamist group.