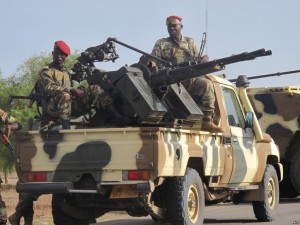 Security was tight for the 24-hour visit, after a surge of Boko Haram violence in Cameroon including an unprecedented series of five suicide bombings in the far north.

Presidential guard soldiers were posted on rooftops of houses and along the route from the airport to the presidential palace in Yaounde, while vehicles armed with machine-guns patrolled the streets and access to the hotel where Buhari will stay was blocked.

The trip comes a day after Nigeria vowed that a new regional force tasked with fighting the jihadists would go into action soon.

Boko Haram has stepped up its attacks since Buhari took office in May, unleashing a wave of violence that has claimed 800 lives in just two months.

The Nigerian president has already visited neighbouring Chad and Niger, which have also suffered from attacks by the Islamist fighters.

Nigerian military spokesman Major General Chris Olukolade said on last Tuesday that the new regional force would be operational “any moment from now”, without giving a specific date.

The 8,700-strong Multi-National Joint Task Force, drawing in Nigeria, Niger, Chad, Cameroon and Benin, is expected to be more effective than the current alliance in the battle to end Boko Haram’s six-year insurgency that has claimed some 15,000 lives.

Cameroon itself also announced last Tuesday it would be sending 2,000 more troops to the north to take on Boko Haram.