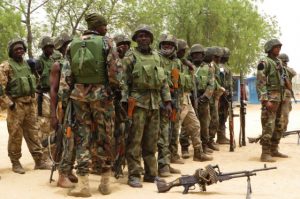 The federal government yesterday said it had launched a new counter-insurgency offensive, in partnership with Cameroon, against Boko Haram terrorists in the Lake Chad region, like reported by thisdaylive.com.

Minister of Defence, Mansir Dan-Ali stated this, yesterday, at the National Mosque in Abuja, shortly after the Jumat prayer for the 2018-Armed Forces Remembrance Day Celebration (AFRD).

Dan-Ali said: “In the North East, I can say they have made great success, as I am talking to you there is an operation going on involving Nigeria and Cameroon. So, we are looking at the armed forces of other countries uniting with us to forge ahead.”

On the prevailing national security threats posed by herdsmen killings, he said: “I can assure you that the Armed Forces of Nigeria is ready to defend our territorial integrity, despite all the internal security challenges.”