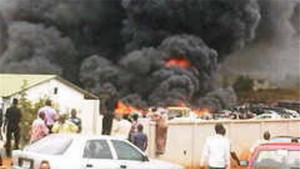 At least 20 people have been killed in a bomb attack in north-western Nigeria’s Zaria city, state governor Nasir El-Rufa’i has said.

A suspected suicide bomber targeted civil servants at a government building in the city, witnesses said.

Emergency workers have rushed to the scene to help evacuate the wounded.

The group has not yet commented on the latest attack.

Witnesses said workers had been queuing up seeking employment under Mr Buhari’s administration when the bomb detonated in Zaria’s Sabon Gari district.

“I am sad that a terrorist bomb attack just killed 20 people in Sabon Gari Zaria,” Mr El-Rufa’i said on his Twitter account.

“We call on our citizens to be vigilant and avoid crowded places like markets, mosques, churches and motor parks in the next few weeks,” he added.