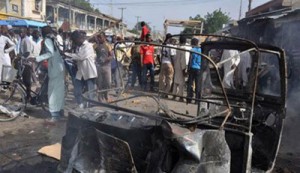 A female suicide bomber last night blew herself into pieces outside a popular Kano Mosque, Umar Ibn Khattab, on Zoo Road in the Kano metropolis a few minutes after rounding off the night prayers.

An eyewitness, Sulaiman Ibrahim, said the teenage bomber attempted to enter the mosque when the explosives went off, in the process killing herself and injuring some members of the vigilante group guarding the mosque.

The eyewitness said the incident happened at about 9.21p.m. after the congregation of Isha and Tarawe prayers, which were conducted earlier than usual.

It was gathered that the bomber had observed that the vigilante members attached to the mosque screening people with electronic devices, and decided to retreat and hide within the vicinity of the mosque.

According to him, the girl eventually summoned up courage and headed towards the mosques but missed her target and blew herself off instead.

Police spokesman in Kano, Musa Magaji Majia, confirmed the explosion, saying that it was only the female suicide bomber who was killed in the attempted attack on the mosque.

Majia said the area was condoned off by a combined team of security operatives, adding that calm was restored shortly afterwards.
He said only few persons sustained injuries during the failed attacked.

He advised residents of Kano to remain vigilant and report any suspicious persons or objects to the nearest security formation in the state.

Meanwhile, Minimah while  handing over the suspects to the governor at the 7 Division of the Nigerian Army, said the suspects had been cleared by military authority after necessary investigations.

“We are handing over 182 detainees who were suspected to have link with Boko Haram. They are 100 men, 24 women, 40 underage boys and 18 children.

“They have been cleared, we have decided to hand them over to the state government.
“They have been thoroughly investigated and acquitted of any involvement in the activities of Boko Haram or connected with the group,” Minimah said.

Shettima who received the released detainees, commended the military for respecting the rights of the suspects.

He said government would assist the suspects to return to normal life.
Maiduguri was shutdown for the celebration of the Nigerian Army Day.

Minimah also said the nation’s soldiers had the onerous task of winning the war against the Boko Haram insurgents for the souls of their fallen colleagues to truly rest.

Speaking at this year Army Day celebration which was moved to the epicentre of the Boko Haram counter-insurgency war, the COAS who was at the graveyards of the fallen heroes of the ongoing war against the Boko Haram insurgents to lay a wreath, said: “The only way to honour our officers and men who lie ahead of me is to ensure that this war is won, and I promise that we will win this war.

“And I will also want to assure the families of the departed colleagues that they will not be forgotten as all the statutory requirements and privileges for children and families they left behind would be honoured and executed.”

He said: “The army is the strength of any nation. And the army is used to rate a nation in the international arena.

“I want to thank the Governor of Borno State for his continued support to the Nigeria Army in  the pursuance of Operation Zaman Lafiya and in this particular case of also, hosting of  the Nigeria Army Day celebration 2015. This has come with a cost and logistics which the governor has undertaken.

“It is a sad ceremony but it is also a ceremony that we must undertake to honour the dead, and for the living, and today, we are honouring the dead.”

Governor Shettima, who also spoke at the occasion, said against all belief Maiduguri, the Borno State capital, was not less unsafe than any other city in the country.

The governor, who was among the dignitaries who laid the wreath at the graveside of the fallen heroes, said: “Believe me, at the risk of exaggerating issues, Maiduguri is as secured as Lagos or Kaduna or any other city in this country. They all face the same challenges that Maiduguri is facing and we want to pay tribute to the gallant officers and men of the Nigeria army who have laid down their lives for this country to remain one indivisible entity.

“Hundreds of our soldiers have died in this counter-insurgency war. We have to respect our fallen soldiers, we have to pray for the repose of their souls but most importantly we have to make their families realise that they did not die in vain.

“This singularly act of coming down to Maiduguri to celebrate the Army Day and coming to identify with us shall be written in gold.
“There is psychology in warfare and the fact that the top hierarchy of the army is here in Maiduguri conveys a lot of message to the soldiers and to the rest of the world that Maiduguri is safe, accessible and secured.”

Meanwhile, for the umpteenth time, the Nigerian army authorities monday deferred the court martial of a brigadier general and 21 others in deference to the Army Day celebration.

The army had on Sunday revealed plans to continue the trial of the soldiers at the court martial sitting at the 9Brigade, Ikeja Cantonment, Lagos.

After concerted efforts to know the status and outcome of the court martial, THISDAY however gathered that it was postponed.
The reason for the postponement was because the army had declared yesterday a public holiday in commemoration of the 152 year anniversary of the force.

The sitting was said to have been tentatively fixed to continue today. This would not be the first time the court martial in Lagos would be postponed. The court martial was once postponed in January this year and later in March.

The 22 soldiers are being prosecuted for alleged offences committed during the ongoing war against Boko Haram insurgents in the North-east.

The soldiers on trial include a brigadier general, 14 colonels, a major, five captains and a second lieutenant, who are part of the 547 others being court martialed in Abuja and Jos.