You are here: Home / Africa / Nigeria: Boko Haram terrorists burn down over 140 houses in Borno 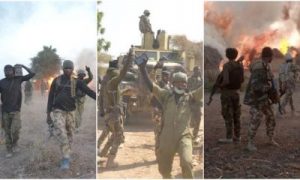 Over 140 houses were reportedly razed by Boko Haram militants in Egiri, Zira 1 and 2 villages of Biu Local Government Area of Borno state in northeast Nigeria, like reported by dailypost.ng.

The militants carted away foodstuff and livestock, after displacing hundreds of people from the three settlements.

Biu is located in the southern flank of Borno about 187km from Maiduguri, the state capital.

Zira village where the incident took place is 5km away from Gur village which was attacked last Friday, leaving four persons dead.

Zira I and Gur community located North West of Buratai, the home town of the immediate past Chief of Army Staff, General T.Y Buratai, but poor telecommunication services delayed information from reaching people about the latest attacks.

A resident of Zira community, who fled and now taking refuge in Biu town, Ali Yusuf, told newsmen that, the attack happened on Sunday at about 7pm.

Yusuf said, “Luckily, almost all residents had fled out of the town, and the insurgents who came through Garin Mallam Village first attacked Egiri before proceeding to Zira I and II, as they wreck havoc without confrontation.”

Yusuf, however, said no life was lost as the insurgents met the all affected villages deserted, but notwithstanding, the attackers set ablaze about 20 houses in Egiri, 50 houses in Zira I and 75 others in Zira II.

“We are really terrified with the latest attacks by insurgents in our hitherto peaceful communities.

“Since the former Chief of Army Staff, General Yusuf Tukur Buratai bowed out of service; most surrounding villages of Buratai have been experiencing series of Boko Haram attacks without confrontation by security operatives.

“As it is, some of us took liver and went back to our affected communities on Monday, although, no life was lost as the insurgents met the affected villages deserted, but notwithstanding, the attackers set ablaze about 20 houses in Egiri, 50 houses in Zira I and 75 others in Zira II.

“We were lucky to have gotten information about the impending attacks, so we quickly mobilized our family members including women and children and fled before the insurgents stormed these communities,” he said.

He appealed to government and other security agencies to come to their aid, as most of them are displaced with no means of livelihood.

Efforts to get confirmation from the Police Public Relations Officer, DSP Edet Okon, did not yield any result.