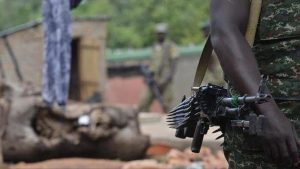 According to local reports, the attack took place as the convoy was travelling on a highway between Borno’s capital Maiduguri and the garrison town of Monguno.

Boko Haram has been carrying out violent attacks on civilians in communities and military bases in the region since July 2009.

Around 36,000 people have died since the group launched its terror campaign, displacing 2 million in Nigeria, according to the UN.