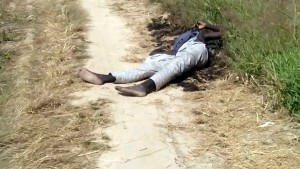 Maiduguri, Borno state capital, was last night rocked by multiple blasts as two Boko Haram suicide bombers made yet another futile attempt to assault residents near a popular motor park, according to premiumtimesng.com

Only the two male bombers died.

One of the suicide bombers detonated his device at Gariki near Muna Park.

The second attacker was shot dead by soldiers before his explosive device went off.

Police and officials of the Civilian-JTF confirmed the blasts.

Police Public Relations Officer, Victor Isuku, wrote on WhatsApp that “preliminary information available is that the explosion occurred at Gariki Muna, which I understand is at the outskirts of town. But details will follow soonest”.

A leader of the Civilian-JTF, Danbatta Bello, said, “The situation has been put under (control) since last night. They were two suicide bombers, who came around Muna, one of them detonated his self; but no one except him was killed. But the second one was shot dead and the explosives on him later detonated”.

Muna Garage has since October, 2016 been attacked seven times by Boko Haram suicide bombers, who succeeded in killing some residents.

The park, mostly used by haulage trucks and by travelers heading for the border areas, is located along the Maiduguri-Gamboru-Ngala Road.

The park is also not far from the home of a local government chairman who was last week arrested, and is still detained by the military for alleged harbouring a suspected Boko Haram kingpin in his home.