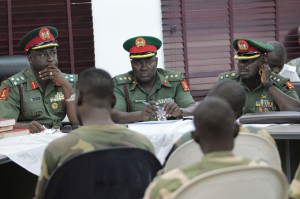 Some Boko Haram elements are seeking dialogue with the Federal Government, the Centre for Crisis Communication (CCC), an independent Non-Governmental Organisation, said yesterday.

The development—should it be genuine— will bring a ray of hope that the seeming intractable insurgency in the Northeast will stop.

Breaking the news, the CCC confirmed that some insurgents approached it to facilitate a channel of dialogue between them and the Federal Government.

The Centre’s Executive Secretary, Air Commodore Yusuf Anas (rtd), made the disclosure at a news conference in Abuja.

Commodore Anas, who was the immediate spokesman for the Nigerian Air Force, also spoke on other national issues including: terrorism, cattle rustling, National Assembly crisis, pipeline vandalism, kidnapping, armed robbery and  Radio Biafra among others

He said: “The Boko Haram challenges have continued to become an intractable crisis situation to our nation. Borno State Governor Kashim Shettima said that more than three million innocent Nigerians from Borno, Yobe, Adamawa and parts of Nigeria live in deep agony having lost their sons, daughters, fathers, mothers, brothers, sisters, relations and neighbours after brutally being attacked by members of Boko Haram.

“Indeed, many of our citizens are now orphans, widows and forced to become refugees within and outside our country.

“Over the years, government has been pursuing the terrorists with the aim of ending insurgency.

“Although, some level of successes has been recorded in degrading the volatility of the terrorists, they are far from being defeated.

“Some prominent Nigerians have in recent times canvassed the idea of dialogue with the Boko Haram.

“Considering the unspeakable atrocities which the group has visited on Nigeria and Nigerians, this option is no doubt a hard sell. However, the recent statement by President Muhammadu Buhari on government’s readiness to negotiate with credible members of the sect has rekindled the hope for dialogue.

“The centre views this gesture as good. It has opened a window of opportunity for dialogue for those insurgents that are willing and ready to lay down their arms.

“This position is predicated on calls made to this centre by some members of the Boko Haram requesting for genuine and comprehensive dialogue that could lead to hundreds of them coming out to renounce their membership.

“The centre, however, suggests that such dialogue should be done with every sense of caution and responsibility, bearing in mind the previous disappointments that attended attempts at negotiations.

“Nevertheless, the centre will continue to support and encourage all efforts towards bringing insurgency to an end in our country.”

The retired Air Force chief warned against the resurrection of militancy in Niger Delta by the outlawed Movement for the Emancipation of Niger Delta (MEND).

He said if there were genuine grievances with the Amnesty Programme, legitimate avenues and appropriate channels should be exploited.

His words: “The centre is equally agitated by the recent moves to resurrect the once rested Movement for the Emancipation of Niger Delta (MEND).

“It was purported to have planned a meeting of its old brigade members on 25, July 2015 in Yenagoa. The arrow head of the meeting is no other person than Mr. Tompolo along with some Ijaw youth.

“Although, Mr. Tompolo denied attempting to resurrect the rested militant group, the last may not have been heard on the issue. Nigerians will recall how this deadly group almost crippled the nation’s oil production from 2005 until when late President Umaru Yar’Adua initiated the Amnesty Programme.

“Since the inception of the Amnesty Programme, billions of naira has been and is still being spent to address the youth challenges of the region.

“The appointment of Brig.- Gen. Peter Boroh (rtd) will no doubt energise the programme. If there are genuine grievances with the Amnesty programme, legitimate avenues and appropriate channels should be exploited.

“However, the full wrath of the law should be brought to bear on any individual or group that wants to engineer crisis aimed at militating against the socio-economic development of our dear nation.”

On the herdsmen clashes with farmers, the CCC chief said it has reached an alarming proportion as ‘it always precipitates bloody clashes’ leaving scores of people dead in different parts of the country, especially in Taraba, Plateau, Benue, Kaduna, Nassarawa, Niger and other states over grazing rights.

He said: This recurring but often violent crisis perpetrated by unknown hoodlums has continued to traumatise innocent and enterprising Nigerians engaged in cattle rearing and farming.

“The crisis is perhaps accentuated by the economic hardship and joblessness. The Centre has received hundreds of calls from several parts of the north over this issue.

“Instances abound where hoodlums send letters to cattle breeders especially Fulanis and farmers to pay hundreds of thousands of naira or even millions as ransom to avert attacks.”

He praised Kano State Governor Nasir El-Rufai for setting up the ‘Cattle Initiative’ to curtail the excesses of cattle rustlers.

Anas said: “The Centre is calling on governments at all levels to ensure every action aimed at finding a lasting-solution to enable the return of normalcy in every nook and crannies of our communities.

“The Centre believes that more discussions and legislative actions at the states and National Assembly levels are needed now on the propriety or otherwise of creating or delineating grazing areas in the country.”

On the lingering National Assembly crisis, the CCC appealed to all the contending individuals, groups or parties to ‘shield their swords’ in national interest “knowing how far-reaching and negative effect political crisis of this dimension could continue to be in inflaming passions, creating divisive tendencies, and ultimately translating in crisis.”

He urged the legislators to emulate President Buhari and slash their remunerations to “demonstrate to Nigerians that they are also sympathetic to the current financial challenges of the nation and ready to make sacrifices to make Nigeria better.”