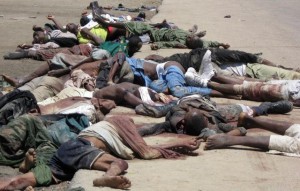 In the Ropp attack on Wednesday afternoon, nine residents of the villages were burnt inside a room in which  they were hiding.

The council chief said the attackers arrived the area in hundreds and surrounded the village.

He said the assailants prevented the villagers from escaping.

Loman said: “These killings are becoming too many. We have been shouting on top of our voices but the appropriate authorities closed their eyes as if it is not human beings the attackers have been killing.

“In the last two weeks, over 60 people have been killed by gunmen in Barkin Ladi Local Government Area alone.”

One of the victims of the Ropp attack, who narrowly escaped death, Samson Dadu said: “At first, the gunmen came and rustled 38 cows from the village. Those cows were recovered the next day by the Special Task Force (STF) when the stolen cows were being transported to the local government.

“But after recovering the stolen cows from the Fulani, they mobilised and attacked Inding village where they killed seven people.

“The next day, the attackers came in hundreds and surrounded the village. They set every house ablaze. If the occupants tried to escape, they were either shot dead or hacked down with machete.

“The attackers were heavily armed. STF soldiers cannot even challenge them.”

The villagers said they had recovered 27 bodies and still searching for the others.

STF officials on Jos Crisis, code-named: Operation Safe Haven, could not be reached last night for comments on the attacks.

The mobile phone of the STF spokesman, Captain Ikedichi Iweha, was switched off when our reporter called the number.