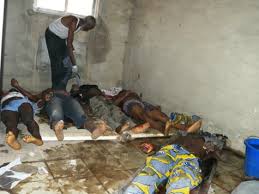 Boko Haram insurgents stormed a mosque in Kwajafa town in the southern part of Borno State on Sunday evening, opening fire on Muslims worshipers as well as bystanders, according to SaharaRep.

The insurgents thereafter swept through other parts of the town in a shooting rampage, killing at least 25 people and leaving many others injured.

Kwajafa is about 140 miles away from Maiduguri, the capital of Borno State. The nearest big town to the community is Biu, which is about 22 miles away.

Peter Wida, a Christian resident of Shaffa, which is a neighboring town to the besieged community of Kwajafa, told SaharaReporters that the Islamist militants killed at least 25 civilians near a mosque during evening Muslim prayers on Sunday.

He said the armed assailants had arrived at the mosque under the pretense that they wanted to preach to the gathering.

“Some of the people from [Kwajafa] fled to our town,” said Mr. Wida. He said the refugees disclosed that the assailants told me that they came to preach at the mosque.

“The people did not know that the so-called preachers were Boko Haram [members]. They gathered the worshipers in a place near the mosque and then, suddenly, opened fire on them,” he added.

Another source named Ibrahim Musa said he received a telephone call from his village that Boko Haram insurgents had killed three of his brothers yesterday and burnt their ancestral homes.

He said he had been trying to reach relatives in Kwajafa since yesterday, “but all their lines were switched off. I am seriously in trouble.”

Mr. Musa said he learned that the insurgents shot and wounded dozens of people, inflicting critical injuries on many.