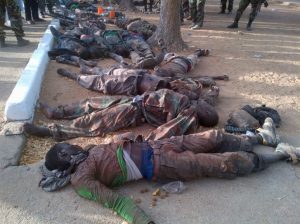 Boko Haram fighters have killed at least 20 loggers, militia members and residents told AFP on Friday, in the latest attack against civilians in northeast Nigeria.

The attack happened on Monday when gunmen on motorbikes opened fire on a group of loggers collecting firewood at Kaje village, near the Borno state capital, Maiduguri.

“They (Boko Haram) killed 20 people in the attack. Fifteen others are missing and presumed kidnapped by the attackers,” civilian militia leader Ibrahim Liman told AFP.

Details of the attack have been slow to emerge due to limited communications infrastructure after years of fighting in the remote region.

Kaje resident Shuaibu Sidi corroborated Liman’s account and said his brother was among the dead.

Nigeria’s government and military maintain that the Islamist militants, who have pledged allegiance to the Islamic State group, are on the verge of defeat.

The conflict, which began in 2009, has killed more than 20,000 and forced some 2.6 million others from their homes, triggering a dire humanitarian crisis in the region.

On December 30, 25 loggers were shot dead at Maiwa village, which is three kilometres (nearly two miles) from Kaje, and three truck-loads of firewood was burned.

Liman said: “We believe the same gunmen behind the Maiwa attack were responsible for the Kaje attack.”

The attackers were believed to have come from Boko Haram’s main enclave in the Sambisa Forest area of Borno, which is accessible from the two logging sites, he added.

Many of those displaced by the conflict are forced to rely on food handouts from aid agencies.

Others have turned to felling trees in the semi-desert region to sell as firewood and use the proceeds to buy food.

Boko Haram has increasingly targeted loggers in their armed campaign to establish a hardline Islamic state in northeast Nigeria.

They have accused them of spying for the military and the civilian militia, which assists troops with security.

At least 31 loggers have not been seen since January 2 and are believed to have been abducted near the town of Gamboru, on the border with Cameroon.

They had left the town to fetch firewood in a Boko Haram hotspot, 15 kilometres away, where 10 other loggers had been killed two weeks earlier.

In August three loggers were decapitated near Aisa-Wulomari village, some 40 kilometres from Maiduguri, as they returned to the city.

In April eight loggers were killed and their bodies burnt at Kayamla village, 10 kilometres from Maiduguri, as they collected firewood in the bush.