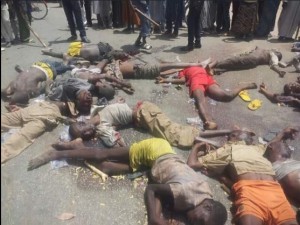 Boko Haram militants on Thursday killed at least 20 people in an attack on a remote village near Askira Uba, Borno State.

Survivors, according to an online news medium, Premium Times, said the insurgents stormed Dile village at 2 a.m. in several vehicles, burning houses and killing anybody in sight.
Ibrahim Usman, a resident who fled to Mubi, said 20 persons were feared killed in the village and many others sustained injuries during the attack.
“Dozens of Boko Haram fighters attacked our village at about 2a.m. and killed 20 people,” Usman said.
“Many of us fled to the bush to avoid being killed. Everybody was running for his life. We don’t know the whereabouts of our family members.”
He called on military authorities to deploy troops to the area to check the activities of the militants.
Another fleeing resident, Gambo Abakura, said: “They just started burning houses and shooting at sight. Most of the insurgents had turbaned their heads; others in quasi-military uniform, chanting Allahu Akbar, meaning Allah is Great,” he said.
Although attempt to speak to military authorities in Yola was not successful but a security source confirmed the attack.
”Yes, there was an attack because many residents had fled to Mubi and they told us the insurgents have several camps in the bush around the area from where they wreak havoc on villages,” said a local vigilante in Askira, Mallam Baba.