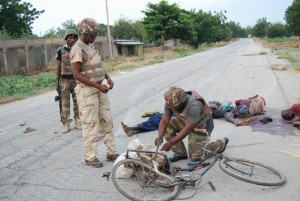 The attacks came barely one week after the Dalori incident in which some 100 persons were killed.

Some residents in Mairi told newsmen that the attackers arrived the village on bicycles at about 8.30 p.m. on Friday.

“The attackers came on bicycles and started shooting sporadically.

“The community was taken unaware as many people were relaxing after the late night Muslim prayers,’’ Malam Baana Bukar, a resident said.

Bukar said that the attackers set ablaze buildings as they ransacked the community.

He said, “we took to our heels to escape the attack. When we returned in the morning we discovered that four persons (three women and one man) had died.

“The women were roasted after their houses were set ablaze by the attackers but the man was shot dead with a gun during the attack.’’

Malam Ahmed Tijjani, the Vice Chairman of the local vigilante-civilian JTF in charge of the Konduga local government confirmed the report.

He said that the attackers also raided an adjourning village, Malari.

“They attacked Malari village after leaving Mairi but the people had escaped before their arrival when they heard gun shots,’’ he said.

Tijjani said that the terrorists set ablaze all private and public buildings in the village.

Alhaji Babakaka Garbai, the Senator representing Borno Central at the National Assembly, who also confirmed the incident, expressed shock at the development.

“Yes, they killed four persons here and burnt all the houses,’’ Garbai said when he paid a sympathy visit to the communities.

He said that the surrounding villages had been deserted as the villagers had fled en mass for fear of attacks by the insurgents.