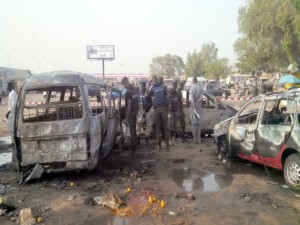 Two explosions killed at least 20 people near a fish market in the Baga Road area of Maiduguri, the Borno State capital, sources said.

“We heard a loud explosion at about 3:50 pm (1450 GMT) while we were preparing for afternoon prayers,” Danlami Ajaokuta, a civilian vigilante assisting the military against Boko Haram told AFP.

“It happened right inside the motor park (bus station) attached to the fish market where labourers were sorting out rice.”

He quoted survivors’ as saying that a woman came into the bus station with a casserole dish, shouting out for customers.

“People were occupied with sorting the rice. No one paid any attention.

“Suddenly, the casserole, which obviously contained explosives, went off. She was blown to pieces… We have sorted out 20 dead bodies and 50 others that were injured.”

Ajaokuta’s account was supported by a labourer working at the scene who survived the blast, which sent people running in all directions in fear and panic.

“The rescue operation is still on, so the death toll may be higher at the end,” said the labourer, who asked not to be identified.

Reports from Maiduguri indicated that the bomber was a girl aged about 17 but there was no immediate confirmation of her age.

There were also indications of a second bombing by a girl about the same age outside the bus station but no one was hurt.

There was no immediate claim of responsibility but Boko Haram extremists have frequently targeted civilians at markets and bus stations during their six-year insurgency.

The Islamist bombers have also used young women and girls as human bombs since the middle of last year, as part of a campaign of terror in the restive northeast and beyond.

At the meeting with the Chief of Defence Staff and other service chiefs at the Aso Rock Villa, Buhari ordered the army authorities to dismantle all military checkpoints mounted in the wake of the Boko Haram terrorist activities.

Permanent Secretary of the Ministry of Defence, Aliyu Ismai’la, who addressed newsmen at the end of the meeting, said that the President ordered the police to take charge of internal security in place of the soldiers.

According to him, the meeting also reviewed the war against Boko Haram and the new strategies to be deployed by the re-invigorated Multinational Joint Task Force (MNJTF) fighting the insurgents in Nigeria’s northeast.

The Permanent Secretary said Buhari proved his military background during the meeting with his input on strategies to be adopted in a new phase of war against terrorists.

He said the strategies to be deployed would ensure an end to the menace of Boko Haram very soon, even as efforts are on to complete the relocation of the command centre of the anti-terror war to the northeast.

According to him, “the Nigerian armed forces are very ready, we have briefed him. One most interesting things about it is that we are going out much happier because he has shown to us that he is still a soldier; he has updated and enriched our strategic plans.

“Second item that was discussed is the movement of the command centre to the North-East. We have briefed him on how far we have gone on that and he has given us some additional assignment, but very soon the centre will be on.

“We have all strategised and we are coming out with one type of strategy that we are going to address the Boko Haram with, unlike before.”

He further explained the absence of heads of police and other security agencies at the meeting, saying: «This is not a national security meeting.

However, soon after Buhari’s meeting with the security chiefs, the Presidency issued a statement clarifying that the presidential order to withdraw soldiers from military check-points applies only to relatively secure parts of the country, to enable them concentrate more on ending the Boko Haram insurgency.

The statement by the Senior Special Assistant to the President on Media & Publicity, Garba Shehu, said the military checkpoints could be retained in areas outside the North-East where the military considered them absolutely essential for the maintenance of national security.