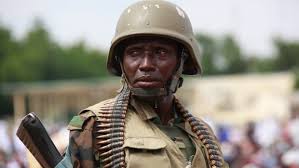 Clashes between Boko Haram fighters and the Nigerian army resulted in the death of more than 60 people in Borno state capital Maiduguri.

Most of the dead were Boko Haram Islamists while some soldiers and residents were also killed.

The Boko Haram militants, equipped with heavy weapons, launched a major offensive against the seventh division of the Nigerian army.

A source told Nigerian daily Vanguard: “Thirty-five members of the terrorists including women suicide bombers were killed by troops, while 27 residents near Kayamula and Alau Dam villages were slaughtered by insurgents after they were repelled and chased away by troops.”

“We were able to bury our 27 people who were slaughtered by terrorists while fleeing but ran into our community and wreaked havoc before heading towards Sambisa Forest on Wednesday night,” a resident named Mallam Abba Alau was quoted as saying.

The Nigerian military said the dusk-to-dawn lockdown was to protect the lives and property in the northeastern city of Maiduguri.

The curfew was mainly declared to snatch women suicide bombers who were believed to have sneaked into the city to unleash mayhem.