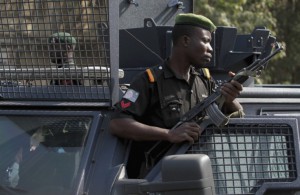 At least eight members of the Borno State Command of the Nigerian Police have been killed in a bomb blast in Damboa, Borno state.

It is believed that the men were killed after they were returning to the capital Maiduguri, where newly elected President Muhammadu Buhari relocated the military operational headquarters to strengthen the fight against Boko Haram (recently renamed Iswap) terrorists.

The men had left the capital with members of the Power Holding Company of Nigeria (PHCN) to rectify some electrical faults in Damboa, an official who spoke under conditions of anonymity told The Cable.

“They were on their way back when they ran into bomb set by Boko Haram,” the source said. “I am sure they saw them when they were going and set the trap. I can’t tell of the PHCN people but eight of our officers were killed in that attack.”

The latest attack occurred days after Buhari, a former military chief, met with regional leaders to discuss tactics to defeat the terrorists.

The Nigerian government is being aided by mercenaries and troops from neighbouring countries Chad, Benin, Niger and Cameroon in its offensive and has scored some successes since the military cooperation started in February.

The US announced it would send military trainers to help the Nigerian army improve its intelligence gathering and logistics.

Buhari is also to meet with activists from Bring Back Our Girls, a movement born in the aftermath of a mass abduction by Boko Haram which occurred in Chibok, Borno, last April.

The terrorists kidnapped some 220 girls who are still missing, amid reports they are being used in suicide bomb missions, being married off or sold as slaves.