You are here: Home / Africa / Nigeria-based journalist arrested in Cameroon, accused of spying for Boko Haram 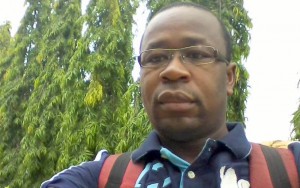 A Lagos-based Cameroonian journalist, Simon Ateba, has been arrested by Cameroonian authorities as he investigated the conditions of Nigerian refugees camped in the country’s far north.

The journalist, who managed to leave a messages on his Facebook page before he was locked up Friday, said he was arrested for venturing, without permission, into a refugee camp with 50,000 Nigerians.

He later told a colleague that the authorities were threatening to charge him for espionage – saying they suspect he was spying for the extremist Boko Haram sect.

PREMIUM TIMES learnt that Mr. Ateba received a grant from the International Centre for Investigative Reporting, Abuja, to investigate the ordeals and suffering of Nigerians who fled into Cameroon as their communities came under sustained attacks from the extremist Boko Haram sect.

Dayo Aiyetan, executive director of the centre, confirmed that his organisation is aware of Mr. Ateba’s travels and investigation.

“We are saddened that he is being incarcerated for doing his job, and we demand his immediate release,” Mr. Aiyetan told PREMIUM TIMES Saturday morning.

Meanwhile, Mr. Ateba on Saturday morning left more messages on his Facebook page detailing his ordeal in the hands of the Cameroonian authorities.

He said, “Was given my phone for five minutes to make some calls. Just spent my first night in Mokolo cell with two Nigerians who fled Boko Haram terrorist attacks between Gwoza and Maiduguri in a town or village called Sigesia. My first night in a cell in Cameroon far north was because I went to a refugee camp with about 50,000 Nigerians to do an independent reporting without they allowing me to do so.

“Having contacted the minister of communication, spoken to the governor, the army spokesman here and having gone to the UNHCR office in Maroua and spoken with officials there, I realised they will never allow me to see Nigerians living there. So I went anyway.

“Entered the camp and saw things for myself at Minawao camp, 12 kilometres in the bush from the main road and about 60 kilometres from Maroua where Boko Haram have struck three times. I spent the night with Abdulahi Amidou who fled and was accused of bringing foodstuff. He denied it.

“Living the best hotel in Maroua to sleep in a stinking cell with mosquitoes everywhere was shocking but Abdulahi and the rest told me their horrific stories. My flight should be 31 from Ndjamena but with me in a cell, that’s difficult to achieve.”

He added, “Still with my phone in my cell. Before I left, I was told I will need to meet the governor of the region who will grant me access to the camp with Nigerians. I met the governor. He said he doesn’t have power. That power rests with the minister of communication.

“I got in touch with the minister and the army spokesman, sent text messages and so on. Here you need to travel to Yaoundé 800 kilometres away to meet the minister when he’s ready to meet you. Then he will send you to meet the governor in person in Maroua 800 kilometres back. Then the governor will send you to see the mayor. Then the mayor will send you to the gendarmerie. Then the gendarmerie will send people with you to the camp. The minister will choose which Nigerian in the camp you will speak with. And generally the leader who will tell you “We are grateful to the Cameroonian government. We are just very well treated here”. So that’s the procedure.”