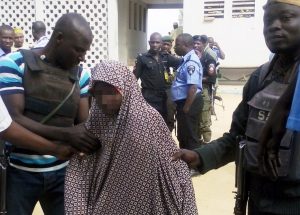 The Nigeria-based extremist group Boko Haram often targets the city with suicide bombers and increasingly has been using female ones.

Danbatta says one bomber sneaked into the Dalori camp and detonated, and two other attackers exploded on or near the camp’s perimeter fence.

Boko Haram’s eight-year insurgency has killed more than 20,000 people, spilled into neighboring countries and created one of the world’s largest humanitarian crises.