You are here: Home / Africa / Nigeria arrests 6 after deadly ‘pirate attack’ on army base 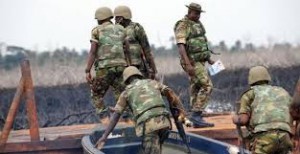 The Nigerian military on Sunday said it had arrested six militants in the country’s oil-rich Niger Delta after suspected pirates killed four soldiers and a policeman in an attack on an army base in the region.

The army said its raid on the armed group’s camp was in response to Friday’s deadly attack, when gunmen in four speed boats stormed the Joint Task Force (JTF) base in Nembe in southern Bayelsa state, police had said.

Militants in the camp are thought to have been responsible for a separate attack on a community in Degema municipality in neighbouring Rivers state, army spokesperson Lieutenant Colonel Isa Ado said in a statement.

“The militants’ camp was destroyed by JTF troops while six suspects comprising of four male and two female [suspects] were arrested. Large quantities of arms and live ammunitions were also recovered from the camp,” the statement said.

Three speed boats, communication gadgets and generators were also recovered from the suspects, some of whom had managed to escape, it added.

The military spokesperson declined to say whether the six suspects under arrest had taken part in Friday’s attack on the military base in Nembe.

The JTF was set up to fight rampant theft of crude oil and piracy in the Niger Delta. The region is notorious for attacks by oil thieves and kidnappings for ransom, mainly of oil workers.

A local monarch in Bayelsa state, the king of Tombia, was kidnapped by gunmen last month. He is yet to be freed.