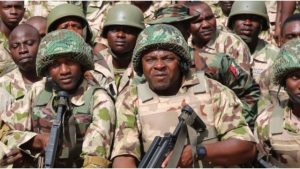 He said the troops of Operation Hadin Kai sustained operations in the air, land and maritime environment leading to the killing of 38 terrorists including the new ISWAP leader, Bako, and rescued five kidnapped civilians.

“Between 15 and 28 October 2021, a total of 1,199 terrorists and their families, comprising 114 adult males, 312 adult females and 773 children, surrendered to own troops at different locations in the North East,” he said

The troops also arrested 11 terrorists including their informants and logistics suppliers in the course of the operation.

He said some of the successes were recorded at Dar, Kumshe, Wulgo, Chabbol and Kijmatari villages in Borno State as well as locations along Ngala – Wulgo and Nguru – Kano roads,Dikwa and Mafa villages as well as Ngama village in Yobe State.