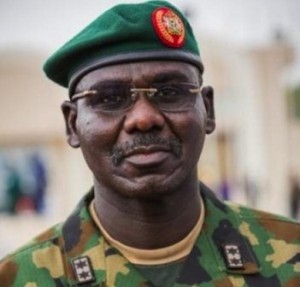 Colonel Sani usman, in a statement narrating the encounter said the advance team of the convoy was ambushed at Faljari village between Mafa and Dikwa, near Maiduguri, the Borno capital.

The insurgents, he said encountered an overwhelming fire power.

Ten of them were killed, while five were captured.
“During the encounter, sadly, we lost a soldier, while an officer and four soldiers sustained gun shot wounds. The arrested terrorists have been sent for interrogation while the remains of the gallant soldier and the wounded soldiers were evacuated back to Maiduguri.

“The wounded soldiers are stable and responding to treatment at 7 Division Hospital and Medical Services. At Dikwa, the COAS interacted with a mammoth crowd of internally displaced persons where he assured them of their safety,” said Usman.

He added that General Buratai thereafter addressed some soldiers of the 112 Battalion and he told them that the Boko Haram terrorists should not have any freedom of action or movement within their area of responsibility.

The 140km journey, said to be a dangerous trip, was to serve as a morale booster to the troops fighting Boko Haram terrorists with Buratai visiting them in the frontline of their operations.

At 112 Battalion at Mafa, the COAS commended the troops and enjoined them to continue to be hardworking and dedicated.

At Logomani, where troops of 7 Division Strike Group were refitting, Usman said the COAS informed them that Nigerians were very proud of them.

Usman recalled that the unit recaptured Dikwa and now heading to the next objective. He also said that he was adequately briefed by the GOC 7 Div about their problem.

According to Usman, the COAS also delivered Preuratai President Buhari’s goodwill message.
“One interesting aspect of the visit was that Nigerian Air Force led by the Chief of Air Staff, Air Marshal SB Abubakar gave air cover and conducted armed air reconnaissance on the general area.

While the IDPS were excited with the presence of the COAS , troops at various locations were equally in high spirit and good to go.

“The troops indicated their readiness to carry out assigned tasks,” Usman said.