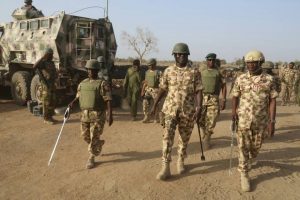 Following the commencement of “Operation Positive Identification” by the Theatre Command Operation LAFIYA DOLE (OPLD) across the North Eastern part of Nigeria in search of fleeing terrorists, the troops have arrested five key terrorists logistics suppliers and fighters, like reported by leadership.ng.

He however, did not state the names of the arrested terrorists.

He, in an earlier statement, said some of the fleeing criminals are found to be hibernating in some towns and villages of Borno and Yobe States in particular and the North-east region in general.

Theatre Command OPLD therefore enjoined members of the public to always carry valid means of identification such as National Identification Card when moving or passing through  Adamawa, Borno and Yobe States.

He also charged members of the public to cooperate with the troops by moving along with valid identification cards and present same to the troops in the efforts to rid the  North-east zone of criminals fleeing for safety.