You are here: Home / Africa / Nigeria and Islamist Boko Haram: awaiting the Super-Tucano 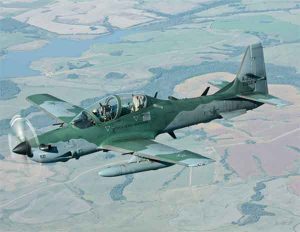 President Mohammadu Buhari demonstrated his seriousness to wipe out insurgency in the North East when he ordered for the withdrawal of $496m from the country’s excess crude account (ECA) for the procurement of 12 Super-Tucano fighter Jets from the United States government, like reported by leadership.ng.

Although the president had written to the National Assembly indicating his decision to purchase the jets but given the urgency of National Security, he chose to tread the path of anticipatory approval. H, therefore, withdrew the money and paid for the jets which will be built and delivered by 2020.

The A-29 Super Tucano is an aircraft that the U.S. Airforce paid to develop precisely for partner countries that needed air support for their counter terrorism operations. It has a contract with Sierra Nevada Corporation and Embraer with the aircraft produced at Embrae’s facility on grounds of Jacksonville International Airport in Jacksonville, Florida.

Defeating Boko Haram requires sophisticated aircrafts such as the super-Tucano with its capabilities of effectively decimating the insurgent Camps in remote areas as experienced in Colombia against Fuerzas Armadas Revolution arias de Colombia (FARC) insurgents, and ended the 52 years of guerrilla conflict estimated to have claimed 220,000 lives .

The nimble lethal airplane reportedly can carry a wide array of armaments including precision guided munitions and is equipped with advanced avionics communications and remote sensors, and is powered by a variant of the world’s most popular turboprop-engine, the Pratt & Whitney (UT&N) that incorporates FADEC (Full Authority Digital Engine Control) and EICAS (Engine Indication and Crew Alerting System).

It has a maximum speed of 590 kilometers per hour and a flight ceiling of 35000 feet. The Tucano can be used for training, surveillance, and can attack from the air at less than 304 metres above ground battle. It offers the capability to operate from unimproved runways. Embraer, the Brazilian makers of the aircraft says the plane could withstand +76/-3.5G loads and that the aircraft structure is corrosion-protected. The side-winged canopy has a windshield capable of withstanding a bird strike at 270kts. And the cockpit environment, it says, has been enlarged to comfortably accommodate male and female pilots and the instrumentation designed to glass cockpit standards.

The super-Tucano has a history of successful operations with a number of International Operators including Afghanistan, Ecuador, Indonesia, Philippine, Iraq etc. Ghana currently has five Tucanos and has finalized a deal to up them to nine. Libya, Senegal, Mali, Mauritania, Burkina Faso and Angola, are either operating the aircraft or negotiating purchases. However, while A-29 Super Tucano does have a proven performance and safety record , Aviation experts say its light attack mission can be inherently dangerous with the aircraft frequently prosecuting targets at medium to very low altitude.

In fact on July 11, 2012 one of Colombia’s 25 Super Tucano’s was lost near Jambalo town, when the aircraft was flying in one operation against FARC rebels. The rebels claimed they shot down the aircraft with 50 Cal (12.7mm) Machine gun, but the Colombian Air Force challenged the rebel group claims after inspection of the aircraft wreckage. Only recently in June this year, a U.S Navy pilot was killed in A29 Super – Tucano crash inside the country’s Red Rio Bombing Range inside the white sands missile Range. Another crew member on board was reported as injured after ejecting from the aircraft. The aircraft was part of the U.S. Aircraft Light Attack experiment program.

It is an evaluation program that is performing analysis and flight test on several small, mostly turboprop light multi-role aircraft to demonstrate their capabilities for potential integration into U.S. and allied air combat roles. The A-29 is the seventh U.S. Airforce crash since the beginning of the year. The most recent ones involved a WCBOH from the 156th Airlift Wing from Puerto Rico. Be that as it may, what is the guarantee that Nigeria would eventually have the 12 super-Tucanos delivered to her in 2020 especially now the United States and other western countries are continuing to engage African countries on issues of governance and respect for human rights as one of the pillars of their policies on the continent.

Senator Patrick J. Leahy, Democrat Senator from Vermont had his bill to ban the sale of U.S. arms to countries with poor human rights record passed into law. Since the Leahy law came into being, the United States government has used it to block the sale of the cobra helicopters by the Israelis to the Nigerian government in 2014.

The Obama Administration in 2013 signaled its displeasure of Egyptian military bloody crackdown on the Muslim Brotherhood by withholding delivery of several big-ticket military items including Apache attack helicopters, Harpoon missiles, MI-AI tank parts and F-16 war planes as well as $260m for the general Egyptian budget. Canada’s Export control prohibit the sale of arms to countries with a persistent record of serious human rights violations against their own citizens.

It is on this grounds that the Canadian government is under pressure to cancel sale of military helicopters to Saudi Arabia which is currently with the support of United Arab Emirate leading air strikes on Yemen. There are concerns that Canadian arms could be complicit in the on-going fight in Yemen where thousands have been killed. The U.N. recently described Saudi Arabia as the world’s worst humanitarian catastrophe right now.

Human rights advocates expressed disbelief that Canada was selling Bell 412 combat helicopters to the Philippines considering that country’s poor basic human rights record and its controversial leader, president Rodrigyo Duterte, who once boasted about throwing a man to his death from a helicopter. Sweden passed a new law in April this year to limit sales of arms to dictatorships and countries where human rights are severely under threat.

Saab, Sweden’s government arms manufacturer and the 12th biggest arms exporter in the world, agreed in 2017 after six years of discussion to introduce a democracy criterion for granting arms export licences. The truth is that the United States led western countries are taking the issues of unlawful arrests, extrajudicial killings, and disregard for basic human rights including clean-up of oil polluted environments into consideration in determining who buys arms from them, and from their allies.

And that includes which country gets spare parts for military equipment already supplied even against the wishes of their arms companies. It is on this ground that African countries must equally review their military cooperation with western countries. For instance the super Tucanos when delivered to Nigeria would be serviced in the United States and that would be very expensive. So would be the supply of spare parts which can be stopped at any time depending on the political behavior of the country’s leadership. President Buhari must have quickly paid for the Tucanos but that does not necessarily mean it is a done deal.