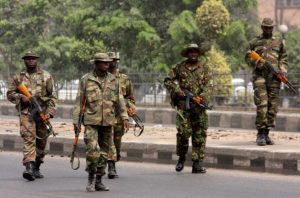 The Nigerian Army said its troops attached to Operation Lafiya Dole under the army’s 3rd Battalion, 22 Brigade have killed 11 terrorists and rescued 85 hostages in its ongoing daily clearance of the remnants of Boko Haram, like reported by premiumtimesng.com.

The operation carried out on Tuesday ended with the rescue of the hostages at Mogola, Ngaiwa, Tongule and Warsele villages in Borno state.

A statement signed by Sani Usman, army spokesperson said the operation which was successful in achieving its objectives was supported by the Nigerian Air Force alongside some civilian JTF.

Mr. Usman, a brigadier general, added that the troops discovered and destroyed Boko Haram terrorists’ logistics base and workshop at Ngaiwa.

Five motorcycles, 13 bicycles and a wheelbarrow were also recovered from the terrorists den.

The Boko Haram insurgency in Northern Nigeria has caused about 100,000 deaths since 2009.