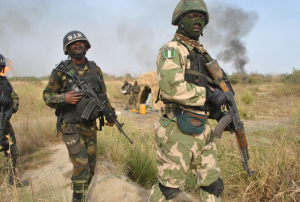 The Nigerian troops of Operation Hadin Kai bombarded an assembly of Boko Haram members Dawuri village at the weekend. The attack of the location, within the Konduga Local Government Area of Borno State, followed intelligence according to dailypost.ng.

No fewer than 40 insurgents planning to execute a coordinated storm in Maiduguri and its environs were killed.

The Army deployed a massive artillery gun against identified Boko Haram camps and hit the target.

A military officer told PRNigeria that the pre-emptive operation was ordered after a report on the movement of the fighters. Their communication was also intercepted.

“The strike hit the mass gathering of the terrorists killing at least 40 of them while others escaped with various degrees of injury”, said the source.The offensive excites the acting General Officer Commanding 7 Division, Brigadier General Abdulwahab Eyitayo.

Eyitayo has sent words of commendation and encouragement to the officers and men for the latest feat.