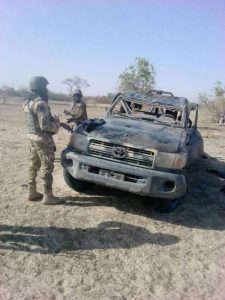 The troops of Operations Lafiya Dole have said over 107 Boko Haram terrorists were killed in an ongoing operation around Lake Chad general area in Nigeria’s northeas, like reported by saharareporters.com.

A statement by issued by the  Director of Army Public relations, Brig Gen. Kukasheka Usman to newsmen in Maiduguri on Tuesday, the Army said 4 soldiers were killed while 9 were wounded.

According to the army, Nigeria has made tremendous success in its latest “Operation Deep Punch ”

“So far, the troops have neutralized over 50 Boko Haram terrorists, destroyed and captured high calibre arms and ammunition, especially in the Lake Chad general area.

During the clearance operations, Boko Haram terrorists abandoned the area in disarray leaving behind livestock, a large quantity of foodstuff, motorcycles and donkeys. .”

Gen. Usman stressed that in Metele however, the terrorists attempted to attack troops in harbor, but this was stiffly resisted with a heavy casualty on Boko Haram terrorists.

“Troops neutralized over 57 of them, destroyed gun trucks and other equipment. The gallant troops also discovered terrorists’ logistics base at Tumbu Ndjamena which held stocks of fish, foodstuffs, fuel and motorcycles. All these items were promptly destroyed.”

He added that large caches of ammunition and 6 trucks belong to the terrorists were captured.

“Sadly, 4 of our troops paid the supreme price while 9 others were wounded in action. Specifically, a Boko Haram vehicle laden with Improvised Explosive Devices rammed into an MRAP vehicle which exploded killing 3 soldiers, a Civilian JTF and wounding the other soldiers. The remains of the gallant and wounded heroes have been evacuated to 8 Division Medical Services and Hospital, Monguno.” Gen. Usman said.

Meanwhile, a journalist with knowledge of Boko Haram operation, Ahmad Salkida, has revealed that a civilian, Baa Masa’a, Baba Mustapha, a 78 yr old retired hunter and farmer who has been  valuable support for troops in the Sambisa forest area was killed yesterday when terrorists rammed a vehicle laden with explosives into a vehicle carrying Nigerian soldiers.

He described Baa Masa’a as a civilian who was very knowledgeable of the terrain of the Sambisa forest and who had committed himself to rid the area of Boko Haram terrorists even as he barely had enough to cater for himself and family members. Baa’a Masa’a was buried in Maiduguri yesterday according to Muslim rites.