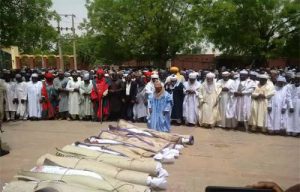 As insecurity worsens, no less than 395 Nigerians were killed in different attacks across the country in the month of June, like reported by saharareporters.com.

Most of the attacks, which took place in the northern part of the country, were carried out unhindered as security agencies were not available to protect the people from the onslaught.

According to the latest life count by the Civic Media Lab, 48 persons were also kidnapped in the country.

The report also highlighted how bandits and members of the Boko Haram terrorist group carried out their attacks in Borno, Katsina, Niger, Kogi, and Zamfara States.

In a breakdown of the attacks, 167 Nigerians were killed by bandits in June 2020.

Also, 152 persons were killed in coordinated attacks by Boko Haram members, while unknown gunmen and herdsmen were responsible for the death of 18 and 17 people respectively.

In an unending communal feud, 36 lives were claimed in tribal fights in Ebonyi, Adamawa, Jigawa and Benue State.

Ten police officers and 21 soldiers were part of those killed in the country.

The states most affected by the killings include Borno, Katsina and Zamfara with 152, 80 and 56 deaths respectively.