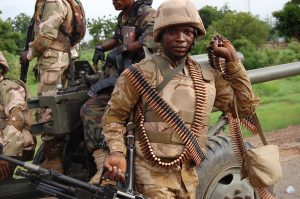 The Defence Headquarters on Thursday said troops of Operation Hadin Kai eliminated 31 terrorists, arrested 71 and received 1,186 surrendered insurgents in two weeks in the North East, like reported by dailypost.ng.

The acting Director, Defence Media Operations, Brig.-Gen. Bernard Onyeuko, disclosed this while briefing newsmen on the operations of armed forces between Oct. 29 and Nov. 11 on Thursday in Abuja.

Onyeuko said that two of the arrested terrorists were women logistics suppliers namely, Mrs Aisha Umar (19) with a two-year-old child and Mrs Kaltumi Bakura (20) who were residents at IDP camp in Bama.

He also disclosed that a total of 97 kidnapped civilians were rescued while a total of 122 assorted weapons were recovered during the period.

According to him, the surrendered Boko Haram elements include their families, 226 adult males, 406 adult females, and 555 children who surrendered to troops at different locations in Borno.

“Within the period in focus, the troops of Operation Hadin Kai conducted a series of land and air operations across the North East theatre that yielded commendable results.

“The sustained synergy in the land and air operational efforts have continued to degrade the operational capabilities of the terrorist elements, limit their freedom of action and drive scores of them into surrendering.

“Some of these operations were executed at different locations in Borno and Yobe , including; Rann, Dalayazara, Gwange Kura, Bam Buratai, Makintakuri and Muduvi villages as well as Marte – Dikwa and Buni Yadi – Jauro Bashir roads,” he said.