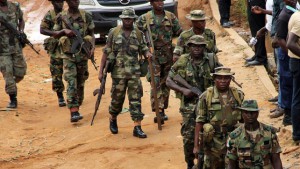 No fewer than 30 members of the dreaded Boko Haram sect were killed in a gun duel with Nigerian troops assisted by the local vigilantes in the early hours of yesterday at the border villages between Adamawa and Borno states.

On the Adamaa incident, Nigerian troops had laid an ambush on the insurgents between the border villages of Kirchinga and Imirsa, which had come under attacks of Boko Haram insurgents in recent times, leading to the death of innocent residents.

A local vigilante operative who participated in the campaign, told Vanguard that following intelligence report about the movement of the Boko Haram insurgents, an ambush was laid for them which resulted in the killing of many of the insurgents.

“Following information about the movements of the Boko Haram insurgents we got, we decided to lay an ambush in the wee hours of Monday.

“Our efforts yielded results as we succeeded in killing over 30 of the insurgents after a fierce gun duel.

“We confiscated many weapons from the invading terrorists, including AK 47 assault rifles, bows and arrows and other dangerous weapons,” the source said.

The onslaught against the insurgents followed increased attacks on parts of Madagali local government area, leading to the death of three soldiers and abduction of one senior military officer alongside his operational vehicle.

“The insurgents who disguised as local vigilante mounted road blocks across the highway and pretended to be carrying out routine checks.

“The soldiers were lured into the booby trap of the insurgents who immediately swooped on them and killed three soldiers and abducted one of the soldiers,” the source said.

In a similar vein, reports from Kirchinga village in Madagali local government area of Adamawa State indicated that a fierce gun duel was taking place between Nigerian troops and Boko Haram insurgents who launched attack on the village weekend.

Confirming the incident, member representing Madagali/Michika Federal constituency in the House of Representatives, Adamu Kamale, called on the federal government to deploy more troops to safeguard lives and properties.

Sources said, however, that scores of the insurgents met their Waterloo as military operatives in Gwoza town repelled the attack much later.

The terrorists, according to another source, also wounded many people after looting their foodstuff, including livestock, and fled without confrontation from the armless villagers.

Sunday is a market day where a few persons from surrounding villages of Limankara and other communities patronize the town for businesses.

Gwoza was declared as an Islamic Caliphate by the group’s leader, Abubakar Shekau last year when his fighters seized the town which is south and about 150kms drive from Maiduguri, the state capital.

After the deadly attacks and taken over of Gwoza by the terrorists last year, including Limankara village, no fewer than 40 policemen undergoing training at the Limankara Mobile Training Camp were declared missing.

A few of them were reported to have been located and rescued, with over 30 still missing at the time of this report.

Reliable sources told Vanguard that with the liberation of Gwoza by military troops early this year, many fleeing residents returned to the town and other surrounding villages to pick up their pieces, before another group of terrorists launched fresh attacks on the town, killing nine and injuring scores.

The source added that just last week, there was a failed attempt by insurgents on Gwoza town, but they were repelled by the military, living unspecified number of the terrorists dead and recovery of their arms and ammunition.

On the recent attacks on Gwoza, another source who was on his way to Gwoza from Maiduguri at the time of the attack had to spend the night at Limankara, stating that he was compelled to do so because the military had blocked the only existing Madagali- Limankaa- Gwoza road.

The source said he was on his way to Gwoza with a truck of cement and other building materials for sale, following relative peace witnessed recently in the town, but had no option than to spent the night at Limankara before moving back to Madagali town of Adamawa.

All effort to get confirmation from the Police Commissioner, Mr. Aderemi Opadokun did not yield positive result as his phone lines were not reachable at press time.