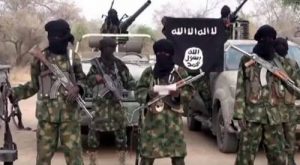 At least three persons were killed and four others injured when a Boko Haram suicide bomber struck in Maiduguri very early on Monday morning, security and resident sources have confirmed according to saharareporters.com.

The blast occurred at popular Baga Road area, precisely at Barka Da Zuwa junctions in Maiduguri about 01:35 hours when a male suicide bomber blew himself up and killed two civilians while injuring four.

“Another male suicide bomb today 11-06-2018 at about 0135 hrs in baga road at Barka Da Zuwa junction in Maiduguri,” said Modu Baba, a resident, in a text message to Saharareporters

“Three persons dead, including the suicide bomber, while four others were injured.”

Security sources also confirmed that there was blast in Baga Road area but they didn’t state the casualty toll.

It would be recalled that two days ago, a lone bomber killed self at the crowded post office area in heart of Maiduguri city.