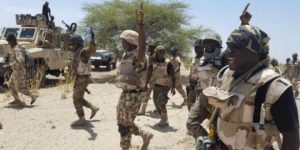 Military chopper has evacuated wounded soldiers from Damasak to Maiduguri this morning after a fierce battle with ISWAP, a splinter faction of Boko Haram which pays allegiance to ISIS fighter, like reported by dailypost.ng.

Sources within the military on Monday said two soldiers were killed in the aftermath of the battle with the insurgents last night in Damasak.

Also, another impeccable source told DAILY POST that 39 ISWAP fighters were neutralised by the combined effort of the Nigerian military and its Niger Republic counterpart, who engaged the insurgents for over four hours in the battle to reclaim Damasak.

Damasak, the headquarters of Mobbar Local Government Area of Borno State in northeast Nigeria is about 160km from Maiduguri, the state capital.

Damasak has been a target for control by the Boko Haram and other terrorists fighters but have been in the firm hands of the Nigerian troops.

According to residents of Damasak, the town has been attacked many times resulting in heavy casualties on the side of the militants.

“Yesterday’s fight was devastating, and this was the second time the Nigerian military had to withdraw from a battle for Damasak but were also quick to reclaiming their position.” A security expert who did not want to be mentioned told DAILY POST.

“We got a report that there’s threat over the inhabitants of Damasak town as armed men suspected to be Boko Haram sects are regrouping between Songia settlement and Geidam Chuku village under Niger Republic with the intention of attacking Damasak town. But we believe in the military formations at this end which is vigorous and proactive,” he said.

He said when the insurgents attacked, the military made a tactical withdrawal which is an act in warfare to give the enemy the feeling of weakness in order to take them by surprise.

“This is what happened and the end result is the neutralisation of any of them,” he added.