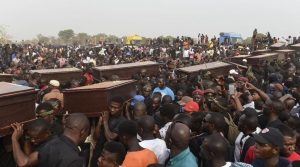 Nineteen Nigerian Christians are now known to have died in an attack by Fulani militants on the village of Kwatas, in Nigeria’s Plateau State, aid workers say according to bosnewslife.com.

The villagers were taking part in a social gathering on Sunday, January 26, when the militants struck at around 7 p.m. local time “in a relentless assault,” said aid and advocacy group, Barnabas Fund. The attack continued into the early hours of the following day. One family lost two of its members in the attack, the group added.

The attack comes amid broader concerns within churches and among aid workers about Muslim extremism directed towards Christians in the African nation. “Christian cattle farmers in the Mangu and Bokkos areas have endured an upsurge of violence in the past two years,” Barnabas Fund explained in a statement.

“A Barnabas Fund contact said it is thought the attack was carried out by the Fulani in revenge for the arrest of seven people suspected of involvement in an earlier murderous assault on Kombun village,” the group stressed.

“Thirteen young Christian men were killed in Kombun on January 11 as they tried to protect their community and stop their cattle being stolen by marauding Fulani gunmen.”

The targeted villages are in the neighboring local government areas of Mangu and Bokkos, which have seen “an upsurge” in violence recently, according to local Christians.

“They have come under serious attacks in the past two years which have led to the destruction of lives, houses and the loss of farmland,” Barnabas Fund quoted its contact as saying.

Besides Fulani militants, who are mainly Muslim, other groups such as Boko Haram have also attacked Christians in several parts of Nigeria.

The government has come under pressure to step up security in the troubled regions.