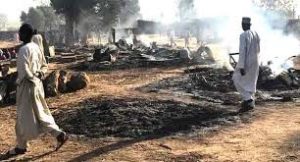 At least 13 people died and another six were abducted in an attack by the Boko Haram Islamist group in northeastern Nigeria, the local Daily Trust newspaper reported on Monday, citing its sources.

According to the news outlet, the militants attacked the village of Takulashe in the country’s northeastern Borno state on Sunday.

As a result, the whole village is said to have been razed to the ground, with all of its livestock and farm produce, as well as six people, taken by the attackers. Thirteen are reported to have been killed in the raid.

In 2009, Boko Haram launched an armed insurrection against the Nigerian government to introduce sharia law throughout the country. In 2015, it aligned itself with Daesh.