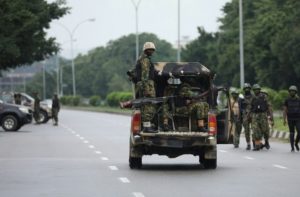 Nigeria’s Premium Times reported attack on a military convoy by Boko Haram terrorists in which 11 soldiers were killed and 14 others wounded.

This brought total Nigerian military casualties for the week to 38 dead and 16 injured, plus six civilians killed and 16 kidnapped.

The Premium Times saluted the troops for their “patriotic battle to drive out insurgents from the country’s borders,” but heavily implied the Nigerian government is keeping information about such attacks hidden for as long as possible because the effort against Boko Haram is not going well. According to the report:

The terror group has been largely successful in its rapid attacks on Nigerian troops, with soldiers being lost at a high rate in many firefights. Hundreds of soldiers have been killed since July 2018, and the military lost more than 100 men in a single attack in November that year.

The apparent helplessness of the military leadership to forestall the wanton loss of personnel to insurgents serves as an indication of the precarious state of the war, said security analyst Olumide Adesanya.

“What we have seen over the past year and now come to accept is that Boko Haram is getting stronger and the army has been responding to the situation from one lousy strategy to another,” Mr Adesanya said. “Military casualties should not be a daily affair if we have a good strategy against Boko Haram.”

Another setback occurred in late September when insurgents attacked a military unit securing a portion of restless Borno State and killed 18 troops. Military officials announced that 22 soldiers from the unit deserted after the attack and became the subjects of a manhunt, with little subsequent word about any of them being captured.

Olumide Adesanya, the analyst who spoke to the Premium Times, grimly noted Boko Haram has curtailed its efforts to randomly bomb civilians because it began having success at attacking military patrols and encampments, with very few insurgent casualties reported during its operations.

Another weekend article at the Premium Times rattled off a string of Boko Haram attacks and kidnappings from the previous week, including the abduction of six young girls and two teachers from a secondary school. Boko Haram has an infamous predilection for abducting schoolgirls and forcing them to “marry” its fighters.

The site of an infamous Boko Haram kidnapping spree from February 2018, the Government Girls Science Technical College Dapchi of Yobe State, was reportedly closed on Monday due to fears of another raid by the militants. Students were told to remain at home until their safety could be assured.

Buhari was warned by international aid agencies on Saturday that he risks causing a humanitarian disaster by threatening to expel aid groups from northeastern Nigeria. Buhari’s government claims the aid groups have been covertly funneling money to Boko Haram. The agencies say their personnel have occasionally been robbed by the militants, who executed a captive aid worker last week.