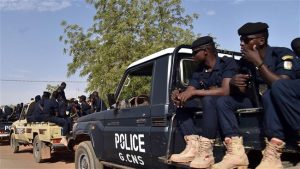 Three police officers were killed in western Niger in a border region that has come under repeated attack from jihadists, the defence ministry said according to dailymail.co.uk.

“On Monday at around 21:40 (2040 GMT) the police station at Goube was attacked by terrorists. We have three dead and an injured among our ranks,” a statement said.

Goube, located about 40 kilometres (25 miles) north of the capital Niamey, lies in a region that has suffered repeated attacks from jihadist incursions from neighbouring Mali.

Local radio Saraounia said the encounter lasted about 30 minutes and the attackers fled after police reinforcements arrived. It said the assailants had probably fled to Mali.

In attacks in this region last October, 12 Nigerien gendarmes were killed and four US troops and four Nigerien soldiers died in an ambush.

Niger is a member of the so-called G5 Sahel group, also comprising Burkina Faso, Chad, Mali and Mauritania, which are building a joint military force to fight jihadism in the vast Saharan region.