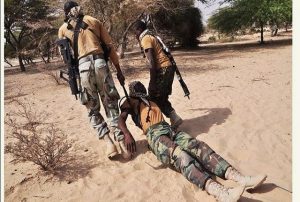 Two soldiers were killed and five others wounded in a “terrorist” attack in southwest Niger, a region that until recently had been spared insurgent raids, the interior ministry said, according to thedefensepost.com.

“A detachment of the security and defense forces [FDS] clashed Sunday with heavily armed terrorists in a valley near Dogon Kiria,” the ministry statement said.

“Following intense combat the enemy was pushed back,” it said, leaving two soldiers dead and five wounded, while the “enemy” casualties were not yet known.

It was the second such attack in the Dogondoutchi department of Dosso region which until recently had been spared raids by armed groups. In February, two gendarmes and a civilian were killed in an attack by armed men at Bagaji, a village in the region.

One of the world’s poorest countries, Niger lies in the heart of the fragile Sahel region.

Niger faces insurgency on two fronts: the southeastern Diffa region near Lake Chad is increasingly frequently hit by Islamic State West Africa Province fighters whose insurgency began in Nigeria, while militants based in Mali, including al-Qaeda-affiliated fighters, are active in the west of the country and the wider Sahel.

Attacks carried out by ISIS-affiliated militants in the Sahel have previously been attributed to Islamic State in the Greater Sahara but since May, Islamic State has attributed insurgent activities in the Mali-Burkina Faso-Niger tri-border area to ISWAP, rather than ISGS.

Dogondoutchi department borders Nigeria but is more than 800 km (500 miles) west of Diffa, and around 400 km east of the tri-border area.