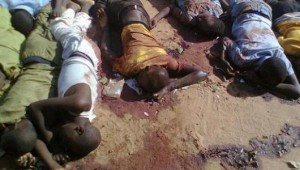 Niger’s government said on Thursday that Boko Haram militants killed 18 people, including a local religious leader, in an attack on a village in Niger’s southern border area of Diffa on the Nigerian border.

The Islamist militants rarely claim attacks but they are based in the north of Nigeria and often launch cross border attacks in Niger, Chad and Cameroon.

The gunmen arrived in the village of Gogone near the shores of Lake Chad on foot and fired indiscriminately on residents and attacked their homes, security sources said.

They also fired rockets in the attack, the sources said.

“Boko Haram has once again sent us into mourning,” said Justice Minister and government spokesman Marou Amadou in a statement. “Eighteen villagers were killed, including the chief imam for the village whose throat was slit by his own nephew.”

Niger’s Diffa region has suffered dozens of cross-border strikes this year by Boko Haram, whose stronghold in northeast Nigeria lies just a few miles away.

A state of emergency has been declared there in a bid to boost security. But the attackers often manage to flee across the River Komadougou, marking the border with Nigeria.

Amadou said eleven people were injured and a three-year-old girl has disappeared. The army was pursuing the “terrorists in all nooks and crannies of Lake Chad”, he said.

Boko Haram, which has pledged allegiance to Islamic State, which operates mainly in Syria and Iraq, has killed thousands and displaced millions of people in its six-year campaign to carve out a caliphate run according to strict Islamic law.

Central African leaders in regional bloc CEEAC said on Wednesday at a summit that they were raising 50 billion CFA Francs ($80 million) to help Nigeria’s neighbors fight the Islamist militant group.

An 8,700-strong regional task force with troops from Chad, Niger, Benin, Nigeria and Cameroon is operational but has yet to begin joint military strikes against Boko Haram.