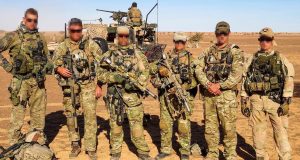 French and African forces announced that more than 100 “terrorists” were killed during a recent operation that also resulted in the seizure of bomb-making equipment, like reported by washingtonexaminer.com.

Niger’s defense ministry said in a statement last week that “120 terrorists have been neutralized” during the operation that took place in the country’s Tillaberi region, which borders Burkina Faso and Mali and has experienced multiple attacks by jihadist groups over the past few years. No French or Nigerien forces were reportedly killed in the operation.

Issoufou Katambe, Niger’s defense minister, praised the cooperation with French forces “in the battle against terrorism.” Groups affiliated with the Islamic State and al Qaeda operate in that part of the country, and violence there has displaced some 78,000 people.

France boosted its military presence in the area earlier this year, and Niger has increased restrictions by closing markets and banning motorbike usage after attacks by the terrorist groups killed 174 Nigerien troops in December and January.

In neighboring Burkina Faso, Islamic jihadist groups have targeted churches, with one attack this month killing two dozen people and injuring 18 more. Last May, a group of about 20 to 30 militants entered a Catholic church in Burkina Faso and killed six people, including the priest.