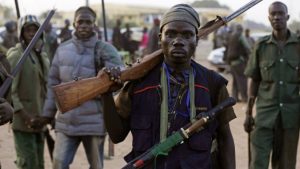 Armed jihadists abducted 10 humanitarian workers as they were distributing food in a village in southwestern Niger, their NGO said according to thedefensepost.com.

The assailants drove into the village aboard motorbikes on Wednesday afternoon and told the victims to follow them, said Kadidiatou Harouna of the Action and Impact Programme in the Sahel (APIS) aid group.

It was the first such hostage-taking of aid workers in the Tillaberi region, where motorbikes have been ordered off the roads since January, she told AFP, adding that the gunmen made off with two APIS 4x4s. She said APIS, a partner of the UN World Food Programme, had worked in the region near the borders with Burkina Faso and Mali “without problems” in the past year.

A German aid worker and an Italian priest were abducted in the region in 2018.

The area has since become a hideout for regional jihadist groups such as the Islamic State in the Greater Sahara (ISGS).

Gunmen have stolen several vehicles of the International Committee of the Red Cross and Doctors Without Borders (MSF) in the region.

One of the MSF vehicles was used in May 2019 in a failed attack on a high-security prison near the Niger capital Niamey where jihadists were being held, according to the authorities.

The entire Sahel region, but especially Mali, Niger, and Burkina Faso, is seeing ever more brazen attacks by Islamist groups despite the beefing up of national armies and the deployment of 5,100 French anti-terrorism troops.

Jihadist attacks claimed some 4,000 lives in the three poor, mainly desert countries last year, according to the UN.