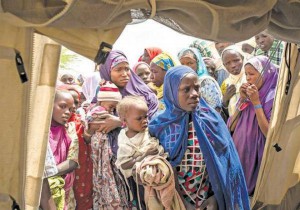 Only 2 years old, Fatouma Ouseini lay in a hospital room, undernourished and listless from fever.

She is among the nearly half a million children expected to endure the food crisis that has plagued the Lake Chad region in the past year, aid groups say, a disaster brought on by Boko Haram’s relentless campaign of killing, kidnappings and looting of entire villages.

Fatouma and her family fled from just across the border in north-eastern Nigeria, the epicentre of the war with Boko Haram, where scattered areas have teetered on the brink of famine for most of this year, according to the UN. Now, some aid workers fear that similar conditions could spill over to bordering areas like here in Niger, putting even more children at risk. More than 70,000 people fled their homes along the border between Niger and Nigeria in the first half of this year. Many have resettled in Diffa, living in labyrinth-like neighbourhoods of mud-brick homes, competing with long-time residents for food and water.

Children like Fatouma are so common that the town’s small hospital has dedicated an entire wing to treating malnutrition and the illnesses that stem from it.

“At home, we had everything to eat and drink,” said Hadja Mahamadou, Fatouma’s aunt, who accompanied her to the hospital. “Here, we’re waiting for food.”

Even in normal times, northeast Nigeria and areas along the borders of Niger, Cameroon and Chad often suffer from a lack of food. It is home to some of the poorest people and highest birthrates on the planet, and their fate often lies with the quality of the year’s crop.

But farming is all the more difficult now. Some farmers have shifted to only crops that grow close to the ground so militants cannot hide in fields. Some farmers are able to sleep in encampments for safety at night, returning periodically to check on crops.

Elsewhere, the presence of militants has prevented farmers from going to their fields. In some areas, farmers have missed the last three harvest seasons. Boko Haram has routinely stolen herds of cattle and raided markets to feed its ranks. Fighters sometimes even send suicide bombers to blow up shoppers. On Friday, two young girl suicide bombers killed 60 people and wounded dozens more in two attacks on markets in rural north-eastern Nigeria.

In response, the military in many areas has shut down markets, cutting off supplies for militants but also for citizens, compounding a food crisis already in full swing.

Nigeria has been particularly hard hit. Food prices have soared even in major cities far from areas where Boko Haram operates. High prices have rippled into neighboring countries that rely on Nigeria for trade.