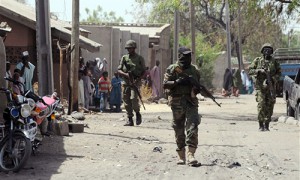 Niger’s army killed at least 30 Boko Haram fighters as it searched for militants in villages just over the border with Nigeria, security sources said.

The army launched the operation on Thursday, a day after gunmen thought to be from Boko Haram crossed over from Nigeria and killed at least a dozen villagers on the Niger side of the border.

Boko Haram has fought a six-year insurgency to carve out an Islamist state in northeast Nigeria, and continues to carry out cross-border attacks, in the face of a military campaign bolstered by Nigeria’s neighbours Niger, Cameroon and Chad.

“Our defence forces who are engaged in the operation inside Nigeria between the towns of Malam Fatori and Damasak, killed the insurgents on Thursday,” a security source said, requesting not to be named.

Boko Haram has started calling itself the Islamic State’s “West Africa Province” since pledging allegiance in March to the hardline militant group which controls large areas of Syria and Iraq.

Early on Friday, two suicide bombers, an elderly woman and a 10-year-old girl, killed at least nine people in the northeastern Nigerian city of Damaturu as worshippers gathered to mark the Muslim Eid al-Fitr holiday, a military spokesman said.

Boko Haram has targeted security forces, schools and other Muslim communities who do not share its hardline version of Islam.