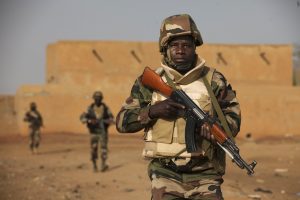 At least seven Niger soldiers were killed and more than a dozen others wounded last week in an attack by Boko Haram militants in the country’s southeast, the government has said according to news24.com.

“The provisional toll for the cowardly terror attack in Toummour is seven dead, seventeen wounded and one soldier missing,” said a cabinet statement.

Toummour is located in the Diffa administrative region, which lies on the border with Nigeria and Chad. It has suffered a string of deadly Boko Haram attacks since February 2015, although the area has been relatively calm in recent months.

Last week, the United Nations said there had been a sharp fall in the number of Niger civilians kidnapped, killed or wounded by Boko Haram last year, citing an overall toll of 141 compared with 227 a year earlier.

It did not detail the number of military casualties.

Boko Haram launched an insurgency in northeast Nigeria in 2009 that in 2015 spilt into Niger. It also affects the country’s other neighbours, Chad and Cameroon.

Overall, more than 20 000 people have been killed and more than 2.6 million displaced in the conflict.